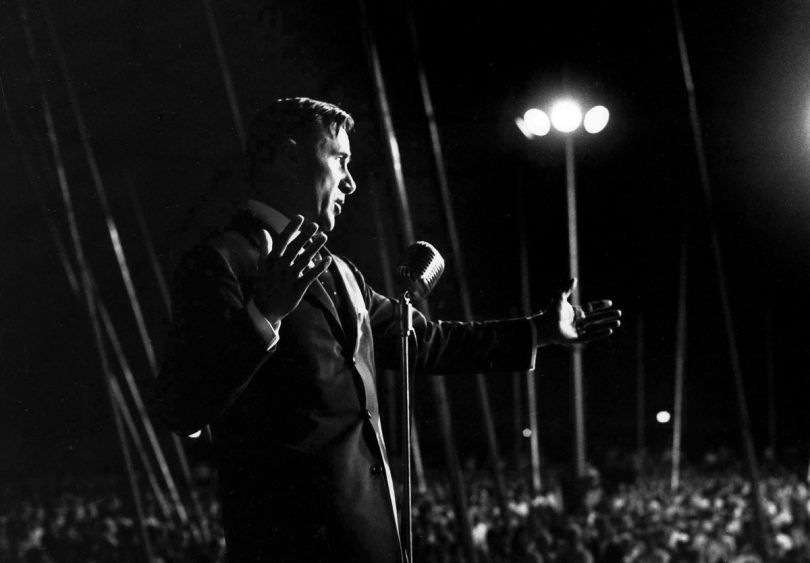 This month we celebrate the 100th anniversary of the birth of our founder, Oral Roberts. Because he was a true pioneer of 20th century ministry and media, we wanted to take a few moments to recall some of the highlights of his ministry career.

In 1947, at the age of 29, Roberts dedicated his life to the evangelistic healing ministry. Over his course of his lifetime, his achievements were many. He conducted more than 300 healing crusades (personally laying hands in prayer on over 2 million people), founded Oral Roberts University, founded the GEB television network, and became known as one of the world’s most recognizable televangelists; all of which just barely begin to scratch the surface of his accomplishments.

You may not know that he began the “Healing Waters” radio broadcast in 1947, released the color film “Venture Into Faith” in 1952 (which was screened in churches around the country), and aired his first television series of “Your Faith is Power” in 1954. After seeing how successful these films were, Oral envisioned a world where TV viewers could experience healing through his crusades right in their homes. By the end of 1954, his ministry had purchased television equipment to invest in his vision.

By March of 1955, Roberts’ “The Abundant Life Program” was airing on over 90 stations around the country, spreading like wildfire, until his programs reached roughly 80% of American televisions just two short years later. During these programs, Roberts performed healings in Tent Crusades until they ended in 1969.

In the mid 60’s, Oral felt that the Holy Spirit was calling him to found a university. Oral Roberts University was opened for enrollment in 1965 in Tulsa, Oklahoma. He believed God said to him, “Raise up your students to hear My voice, to go where My light is dim, where My voice is heard small, and My healing power is not known, even to the uttermost bounds of the earth. Their work will exceed yours, and in this I am well pleased.” Committed to educating the whole person, body, mind and spirit, today ORU has approximately 4,000 students and offers more than 76 undergraduate majors, as well as 12 master’s-level programs and two doctoral degrees.

During the 1970s and 80s, Roberts continued to release television programs including “Oral Roberts and You,” “Sunday Night Live,” “Sunday Celebration,” and “Oral Roberts and Miracles of Seed Faith.” On his birthday, January 24th, in 1996, Roberts’ dream of “going into everyman’s world” became a reality when he started KWMJ TV-53 Tulsa. This station later became Golden Eagle Broadcasting (GEB) satellite network in 1998.

As if this were not enough, Oral also wrote several commentaries to the Bible as well as over 120 books including The Miracle of Seed-Faith, Still Doing the Impossible, and The Ultimate Voice.

The entire extended GEB family is grateful for the life, legacy and pioneering spirit of our founder, the late Dr. Oral Roberts, and we continue to live in the overflow of his faithfulness to God, and God’s faithfulness back to him.